Sandakadapahana is a web blog which will be maintained as a electronic source of knowledge about Sri Lanka history. This web blog will gather all internet sources about Lanka.

You can e-mail articles, inside information, suggestions and comment to sasklanka@gmail.com or sandakadapahana@gmail.com email addresses.

Moonstones: first in a flight of steps leading to a Buddhist place of worship

By A. C. B. Pethiyagoda
(Originally Published on WWW Virtual Library - Sri Lanka) 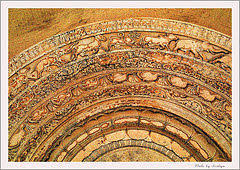 The Sinhala for the moonstone is Sandakadapahana (Sanda-Moon, Kada-Half, and Pahana-Stone). It is a semi circular slab of hard granite, gneiss or limestone, depending on ready availability and is the first in a flight of steps leading to a Buddhist place of worship. These are richly decorated in concentric semi circular bands of low relief carvings of flowers, creepers, birds and animals. Many scholars regard moonstones as some of the finest examples of the ancient Sinhalese artists, which is the reason for reference to them in the Mahavamsa itself.
The moonstone is also called Irahandagala; (ire-sun, handa-moon, gala-stone) in Sinhala. The sun comes into the word because from the earliest of times very many cultures of the world venerated the sun as giver of life, fertility and growth. The ancient Sinhala people were no different as the sun was given a predominant place in their poetry, paintings, sculpture, flags, etc. Its importance is such that their main cultural and social celebration, the Sinhala New Year, around the 14th of April each year, is related to positions of the sun. Thus the significant position of the lotus flower in the moonstone emphasises to the importance of the sun to life itself and is symbolised by the flower which blooms with the rising sun and stays open only so long as it shines. The moonstone is therefore considered to have beneficial magical powers which ensures prosperity when people came in physical contact with it even by merely stepping on it.
The moonstone in this picture was the first step to the entrance of the then temple of the Sacred Tooth Relic at Anuradhapura and is described as a classic example of the "best of the class of the decorated type of moonstone..." The protective wrought iron fence erected round it in recent times, does not unfortunately allow a picture to be taken in bright sun light without its shadow falling on some part of the subject at most times of the day unless taken from a considerable height, requiring specialised equipment or perhaps under conditions of overcast skies. 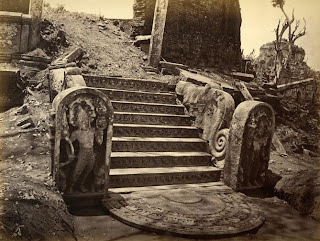 The centre panel of this moonstone consists of two rows of
lotus petals followed by a row of geese between two rows of a creeper followed by a panel consisting of elephants, horses, lions and bulls. The outer most semi circle depicts flames of fire.


R11. Joseph Lawton
The North Entrance to the Watta Dage

S. Paranawithana in his "significance of the Sinhalese Moonstone" explained as follows the significance of each carved panel which according to him represents a spiritual stage in a human’s ascent to Nirvana.
"i. the arc of flower petals (palapethi) motif; the fires of worldly existence.
ii. the arc of four beasts - elephant, lion, horse and bull: the four mortal perils birth disease, decay and death
iii. the arc of undulating scrolls of leaves and flowers forming the liyavela motif: desire or craving (tanha)
iv. the arc of swans or geese (hansa): the thoughtful ones who have left their worldly abodes
v. the arc containing a second liyavela motif: the heavenly worlds.
vi. the arc of lotus petals turned outwards, the arc of lotus petals turned inwards and seed-cup in the centre forming together half a lotus: Nirvana."
All moonstones do not follow this decorative arrangement as some have a panel or two more indicating that the ancient sculptors enjoyed a great deal of freedom in the expression of their art. Some are even more than a semi circle in shape while in others the innermost panels with the lotus flower are raised and are at a higher level than the other panels. Some moonstones of the latter part of the Polonnaruwa period are devoid of the bull as in those times the influence of Hinduism was significant and stepping on a figure of the bull was considered sacrilegious as the cow is sacred to Hindus.
Paranavitana saw a "deep metaphysical interpretation" in the panels while D. T. Devendra thought the moonstone was a mere decorated doormat. While the choice between the two very divergent views is the reader’s, only the ancient sculptors themselves knew the reason for their labours. Some of them could have been inspired by great religious fervour while others may have carried out the task purely for material rewards. On the other hand it could have even been a mix of both. We would never know for certain.
V. Vitharana in his essay, "The Moonstone and its Fertility Associations" supports Paranavithana’s interpretation and goes further to say that moonstones are so numerous in Sri Lanka that even an approximation of the numbers is difficult to make. With excavations going on more are likely to add to these numbers.
The origin of the moonstone is traced to the time of the Buddha. It is said that the floors of the Pabbarama monastery in Savarthi built by the wealthy devotee, Visakha, were covered entirely with rich and rare cloth before she offered it to the Lord. Another wealthy lady who also wished to offer such a cloth could however not find a place to lay it on. Ananda Thero seeing the lady’s disappointment advised her to place her offering at the foot of the stairway leading to the building where the Buddha and monks in attendance would step on after their feet were washed at the entrance to the building. This was done and since that time the first step at the entrance to places of Buddhist worship began to be beautified in various ways and in due course with stones decorated with carvings. At first the carvings were very simple and as time went on these became more elaborate resulting in the moonstones seen today.
Hence, the origin of the moonstone was in India and was later introduced to Sri Lanka with the advert of Buddhism. C. Godakumbura in his book ‘Moonstones’ describes a few seen in Andhra, Sanchi, Ajanta and Elora and goes on to say that some of those were partly decorated while others were carved fully but all these had a connection with Buddhist places of worship. Later on even entrances to palaces came to be adorned with moonstones.
Among the hundreds of moonstones available in Sri Lanka, a few of the most outstanding in beauty and technical perfection are said to be the one described above and those at Mahasena’s pavilion in the Abayagiri area, in the premises of the Sri Maha Bodhi in Anuradhapura and the Vatadage in Polonnaruwa.
The moonstone at the entrance to the Sri Dalada Maligawa in Kandy was of exquisite beauty and perfection but was marred by the LTTE terrorists when they attacked the temple.
at 6:55 AM